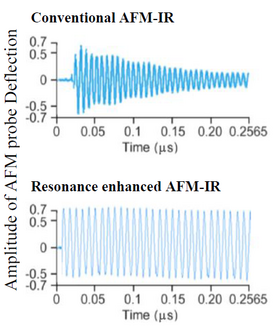 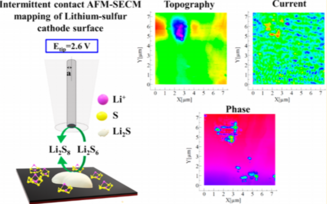 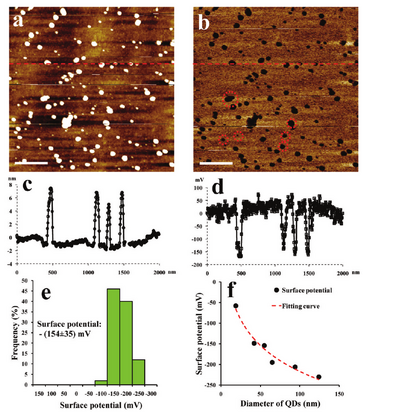 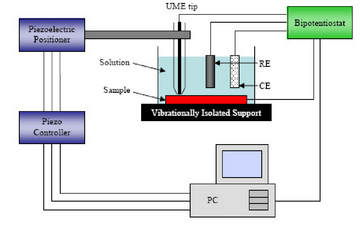 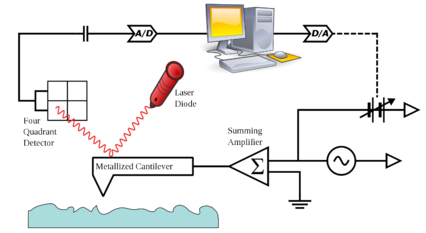 Figure 4. Schematics of the AFM-SECM. 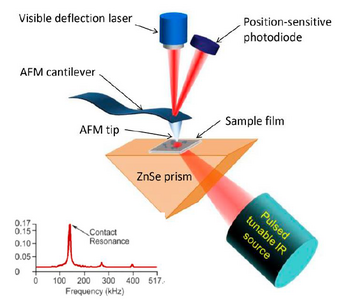 Figure 1. Schematics of the AFM-IR measurement

Atomic force microscopy (AFM) has evolved to be one of the most powerful tools for characterization of material surfaces especially at nanoscale. Recent development of AFM has incorporated a suite of analytical techniques including Infrared (IR) spectroscopy to further reveal chemical composition and map the chemical distribution, which not only elevates the functionality of AFM but also increases the resolution limitation of conventional IR  spectroscopy.

Kelvin probe force microscopy (KPFM), also known as surface potential microscopy, was introduced as a tool to measure the local contact potential difference between a conducting atomic force microscopy (AFM) tip and the sample, thereby mapping the work function or surface potential of the sample with high spatial resolution. With KPFM, the work function of surfaces can be observed at atomic or molecular scales. The work function relates to many surface phenomena, including catalytic activity, reconstruction of surfaces, doping and band-bending of semiconductors, charge trapping in dielectrics and corrosion. The map of the work function produced by KPFM gives information about the composition and electronic state of the local structures on the surface of a solid.
Since its first introduction by Nonnenmacher et al. in 1991, KPFM has been used extensively as a unique method to characterize the nano-scale electronic/electrical properties of metal/semiconductor surfaces and semiconductor devices. Recently, KPFM has also been used to study the electrical properties of organic materials/devices and biological materials.In Kelvin probe force microscopy, a conducting cantilever is scanned over a surface at a constant height while an AC+DC potential is applied in order to map the work function of the surface. The KPFM measures CPD between a conducting AFM tip and a sample. The CPD (VCPD) between the tip and sample is defined as:

where ϕsample and ϕtip are the work functions of the sample and tip, and e is the electronic charge.

Figure 3. Schematics of the KPFM.

Instrumentally speaking, combining SECM with AFM is straightforward: an external (bi)potentiostat is integrated into an AFM instrument to enable the additional function of electrochemical measurement (as shown in Figure 4). The electrochemical data can then be fed in via an analog-to-digital conversion channel provided by the AFM controller. The probe of the SECM-AFM here acts as not only a force sensor for topography imaging but also an electrode for electrochemical imaging. Though different operation modes of SECM-AFM may be applied for specific applications, the working principles are identical to those introduced above. However, the SECM and AFM combination is not simply a pathway for simultaneous measurements of topography and electrochemical activity of the sample surface, but more of an elegant solution to the above-mentioned SECM challenges. For instance, the constant tip-substrate distance undesirably leads to the convolution of topography with the measured electrochemical information, and conventional micrometer-scale SECM electrode limits the spatial resolution of the measured images. By contrast, AFM has excellent tip positioning ability to enable fixed tip-substrate working distances that decouples the topographic and electrochemical information. Moreover, sharp AFM tips permit nanoscale spatial resolution imaging.

Within the last decade, the AFM–IR instrument facilitated many research fields in the polymer material, biological structure and pharmaceutical development. In AFM-IR, a ZnSe prism is used as a sample holder with a pulsed tunable IR laser as the irradiation source. As shown in Figure 1, when the laser wavelength matches an absorption band of the sample, the absorbed laser light causes a photothermal heating effect and a local material expansion. The rapid thermal expansion excites resonant oscillations of the AFM cantilever, which are detected as a ringdown signal. The signal amplitude is then Fourier transformed to be a function of the laser wavenumber and directly reflects the IR absorption characteristics of the material. As the resonance frequency is correlated well with the conventional IR spectra, the spectra obtained from AFM-IR can be searchable in existing databases.

Using an AFM tip to detect the local thermal expansion makes the IR absorption measurement below the conventional diffraction limit possible. Therefore, AFM-IR is also called photo-thermal induced resonance (PTIR) technique. To further enhance the measurement sensitivity, a laser source called quantum cascade laser (QCL) with a high pulsed frequency about 1000 times higher than that previous lasers used for AFM-IR. As shown in Figure 1, by matching the repetition frequency of the mid-infrared QCL pulses with the resonant frequency of the AFM cantilever, the mechanical resonant enhancement of the cantilever deflection amplitude is achieved. This increases the detection sensitivity of the force on AFM tips due to the thermal expansion and gives rise to the IR sensitivity by several orders of magnitude.